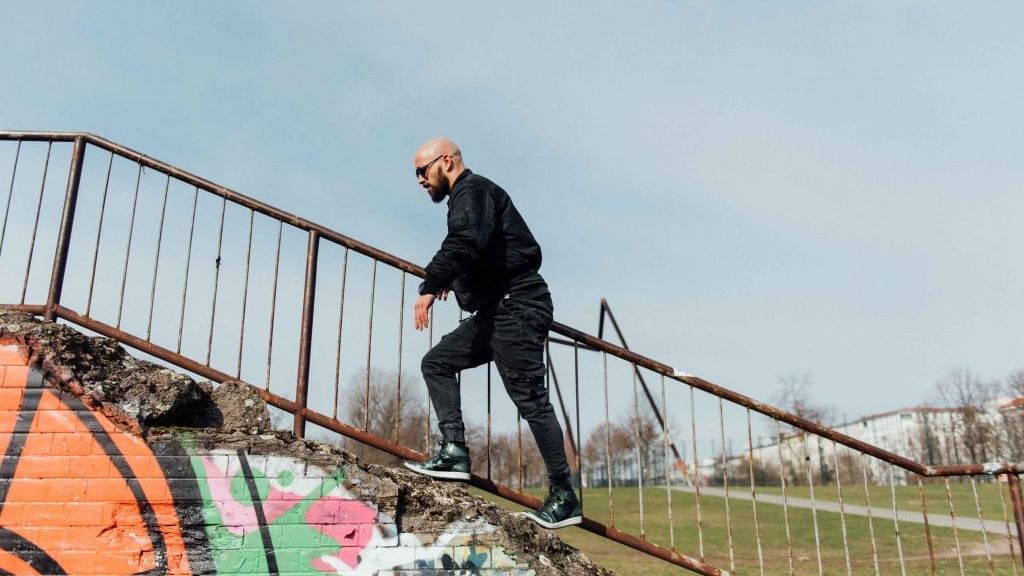 If you take a short walk through the streets of Neukölln, Kreuzberg or Mitte, there's something you're sure to quickly come across: the so-called firewalls, meaning the flat, windowless side walls of old buildings. At first glance they're neither architecturally valuable nor beneficial to the urban landscape, but at second glance they're the basis for Kimo von Rekowski's unique business model.

The graffiti artist and company founder has a moving life story: He was born in Berlin in 1985 and grew up in Berlin's Schöneberg district. At 15, he moved out of home and narrowly escaped a custodial sentence a few years later. "When I think about it today, I regret it all so much," says Kimo, who was pardoned by a judge one last time and joined the German armed forces for a year, where he worked as a chef. Eventually, at age 19 he founded a small business for computer accessories. Today, he creates large murals for advertising customers from many different industries. To do this, he needs the fire walls. He came into contact with graffiti and street art early on, and in his youth he was an active spray-painter.

Together with two friends, Kimo decided four years ago to become self-employed and turned his passion into a job. Street art is no longer just a hobby for him. Today, that avocation is challenging but rewarding work. A freelance graffiti artist needs three to five days to paint a wall with the desired image. The walls (of which Kimo and his business partners have now leased more than 100) aren't just used for advertising customers: "We offer our walls free of charge to artists we know from all over the world." Clearly, Kimo hasn't lost the connection between art and the street scene. However, his business model was met with criticism on the scene, which is characterized by an aversion to consumerism, commerce and large companies. It isn't a problem for Kimo: "We don't care what other people say. We feel good about what we do."

Currently, Kimo is working on another unique project. It's called "The Haus" and is, appropriately enough, situated directly on the Kurfürstendamm in the west of Berlin. Here, together with his friends Jörn and Bolle, he has given 169 artists the unique opportunity to cover walls, ceilings and floors with their work. "The Haus" is free of charge for visitors. The work materials, rent and the 200 cases of beer consumed by the artists during the creation phase were all paid for by friends and generous sponsors.

"The Haus" is located in the Charlottenburg district. Currently, Kimo is working in Mitte and lives with his wife and children in the quiet borough of Wilmersdorf. There is, however, a district of Berlin to which he's particularly connected: Kreuzberg. "My first office was located there, and during my childhood and teenage years I spent a lot of time in the area around Görlitzer Park. Since then, it has become really busy there."

He still swings by from time to time. For lunch, Kimo meets up with a good friend at Hühnerhaus 36, a fried-chicken place known all over town. It's located along the U1 railway line. "I spent a large part of my youth at Hühnerhaus. If I had enough money, I always got chicken there, which was a real highlight of my younger years. Now, when I'm there, the memories come flooding back." The place is very nostalgic for him. Large bowls of pickled vegetables can be found on tables marked by countless guests.
Nothing at all has changed on the menu over the last few decades, so the immediate impression is that Hühnerhaus comes from a time in Berlin when there were no hip fashion boutiques or start-up millionaires.

This isn't the case everywhere, though. Kimo von Rekowski has noticed that his hometown has changed. He has now overcome his anger at the people who've moved in and are characteristic of areas such as Kreuzberg. Large portions of the area have been replaced, and that's why he feels so dearly about Berlin: "I think you're a Berliner if you feel at home here. It doesn't matter where you come from."