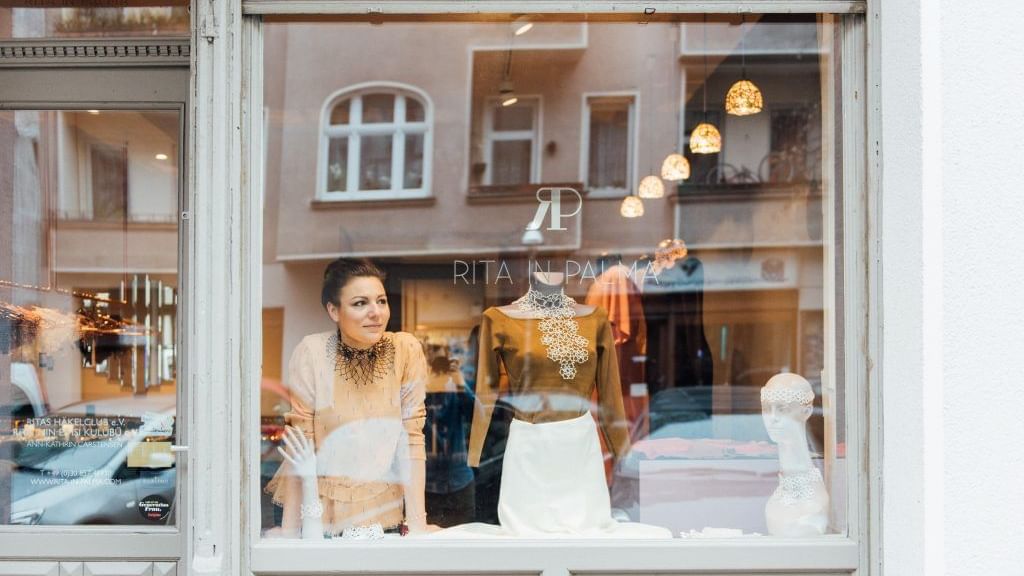 It appears, at first glance, that social work and haute couture couldn't be more distant from each other. But Ann-Kathrin Carstensen is striving to bridge the gap between these two worlds. Since 2011 the designer has worked in a studio in Berlin-Neukölln where she designs and produces high-end fashion while also serving the needs of a societal sector struggling to find a way out of unemployment. Carstensen employs Turkish women, many of whom are mothers and with their skills/help she produces detailed hand-crocheted collars, chains and bracelets.

After dropping out of medical school and successfully completing a course in fashion design, Carstensen, who's originally from Hamburg, founded her own fashion label. That was six years ago, and she called it ‘Rita in Palma’. Word soon spread that high-quality, handmade crocheted pieces were being sold under that name, and in need of extra help, Ann-Kathrin Carstensen was soon on the lookout for women in the city's Turkish community, who could perfectly master the handcraft. She made it clear that they would be able to find work with her. "It took months until I found the first woman," says Carstensen, who eventually established contact with a group of people through a Turkish association.

Today, 12 women work at Rita in Palma, but many more are interested in the work. Once the right workers were found and the first products were launched—all of which were shockingly delicate and meticulously crafted—the attention from the press soon arrived. The editor-in-chief of German Vogue dropped by, and established newspapers reported on the story."

In the largest department store in the city, KaDeWe, there are now three glass cabinets displaying her goods. The Turkish master craftswomen have crocheted exclusive models for a producer of high-quality gloves. Moreover, the product range is constantly being extended. Carstensen’s success has allowed her to set up a non-profit association, which exists in parallel with her fashion label. Von Meisterhand e.V combines free German lessons for employees as well as help with correspondence and communications with offices such as the Immigration Authority. For Ann-Kathrin Carstensen, this coexistence is evidence that high fashion and social work can go hand in hand. "People often say to me that I must now decide whether I'm doing a social project or running a couture label. I then say, "No, I don't have to decide. I can do both."

When the designer finds time to go out, despite all the projects and visions she's working on, she loves to eat at Caligari, an Italian place opposite her studio. She also enjoy the Vietnamese place From Hanoi with Love, where she was a regular guest during the renovation phase of her shop area. When her hunger is satiated, she goes to Tempelhofer Feld, which was a functioning airport until 2008 and is now a vast public park.

It seems that the reuse of space and these contrasts are what attract this entrepreneurial fashion designer. Airport, park, high fashion, social work: for her, they belong together. There's nothing wrong with this. In fact, it's quite the opposite.