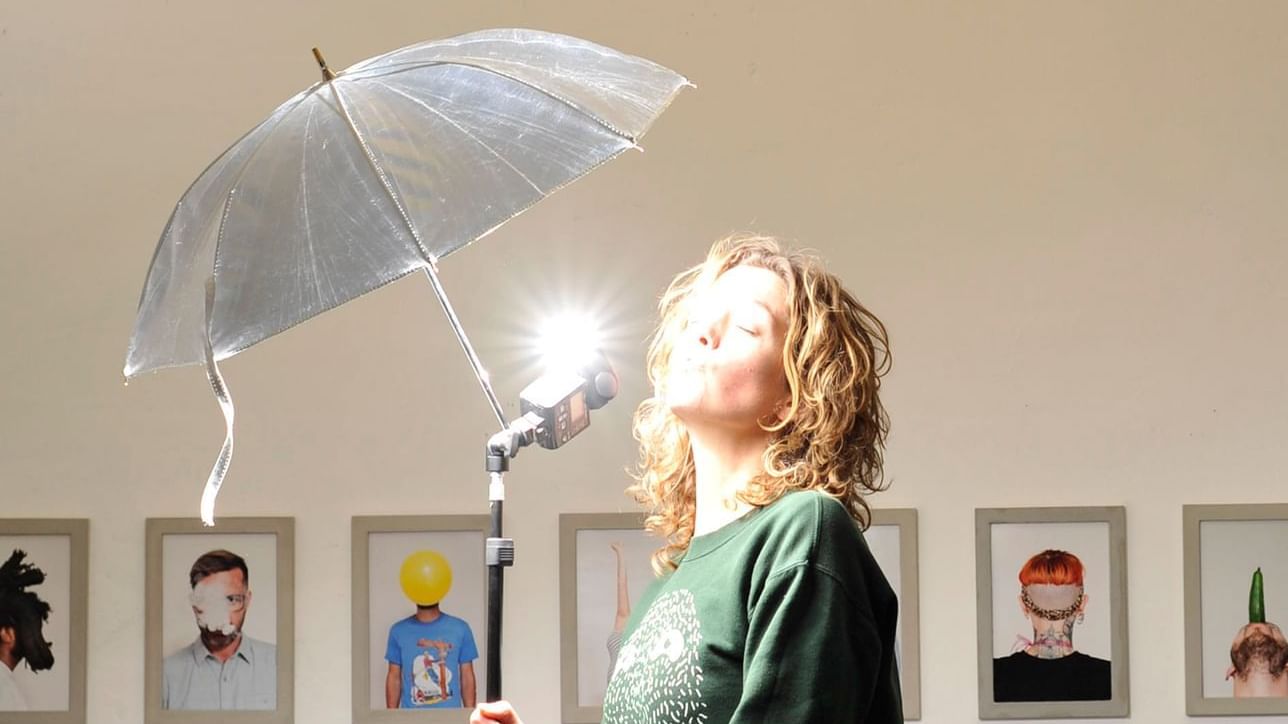 It's the people, in their angularity, delicacy and bizarreness who are the focus of Marga van den Meydenberg's photography. Usually she frames her photo subjects in the center of the pictures, rarely to the right or left. They are often accompanied by curious or unusual objects: A woman is lying in a bathtub full of books, a man has a plunger tied to his face like an oversized nose, another's bald head is covered in pink icing and garnished with currants.

A calmness is created that draws the viewer's gaze into the picture and encourages them to become involved. The portrayed persons, however, do not reveal why they have chosen this accessory or that pose. This remains a secret between the artist and the photographed. These "creative portraits" by Marga van den Meydenberg often happen spontaneously. Between 2015 and 2019, for example, the Dutch photographer operated a pop-up photo studios in eleven Berlin neighborhoods for a month at a time. She invited strangers whom she approached on the street to let her photograph them. More than 800 people - and occasionally animals - found their way in front of her camera. From October 15 to 30, photos from this can be seen in the group exhibition "Sein und Schein: Pluralität und Identität" at the "Kunst- und Projekthaus Torstraße 111" as part of "Fotohaus Berlin 2022".

Meanwhile, Meydenberg works more on commission, in special locations and at festivals, such as Folsom Europe 2022 in Berlin. This year’s series on women, trans and non-binary people, people in latex and leather, or with fetish accessories are photographed completely illuminated against a black background. The "ice cream" photo in the light, on the other hand, turns out to be part of a collaboration with an ice cream store. Ball-shaped, frozen and melting ice cream as well as croissants staged Meydenberg with friends and people from the street. Meydenberg is approached by companies who want to have themselves and their employees photographed in such a distinctive way. "Photography, the humanity, the social and the money-making" is an ideal combination of creativity and profession for Marga van den Meydenberg.

Meydenberg's photos already provided a "life changing moment." She approached a young, corpulent woman - Lisa - for her pop-up project in 2016. "I saw that she was very aware of her body." The atmosphere was relaxed; Meydenberg spontaneously asked if Lisa would allow herself to be photographed nude. "She replied, 'Yes, why not? And so we took cool photos ' Lisa looked super-powerful on camera." They kept in touch through social media and met again years later at an exhibition by another photographer where Lisa was one of the models. "Lisa told me that those were the first nude photos of her, and that because of the experience, she had found more self-love and was able to open up more and more." In May 2022, a second series "Playing in my backyard" was created. In the photo of Lisa bobbing on a rocking horse, the sense of confidence and fun captured in the playfully absurd pose are extremely unique. Two of Lisa's stories can be read on Meydenberg's blog on her website; some photos are projected on an LED screen in the lobby at "Hotel Berlin, Berlin.“ "I'm very touched that I can make such a difference with photography."

These special moments can't be planned, but are important for Meydenberg's creativity: "Sometimes the most beautiful things happen when you're not strained by time or an assignment. (I need that all the time as well though.) For me, it works well that I don't always have a goal, so I can let new things emerge and open up."

Ute Schirmack /PR PEPPER
back to, You Me & Berlin All
Previous Prev Next Next